For some, it’s the most wonderful time of the year. For others, it’s just another day of the week. Whatever it is to you, Halloween is on its way, so we thought we’d take a break from our normal blog banter and get festive. Some of us reflect on beloved costumes from Halloween past, while others could barely remember a single costume in their Halloween histories. Either way, we had each person on our staff dig up a costumed memory! Read on for McNutt & Partners’ all-time Favorite Halloween costumes.

Hanna: “My mom was very crafty, so she would never buy our costumes growing up. She would use things we already had at home—like our clothes, stuffed animals, paint, dad’s tools, etc. So one year, she dressed me as Little Bo Peep—complete with paper towel roll staff.” 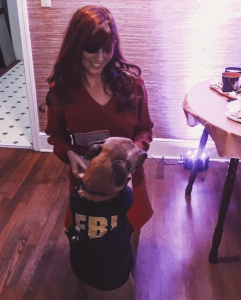 Caitlin: “My favorite Halloween costume was last year’s. My husband Matt and I were characters from Twin Peaks (Nadine and Jacoby) and our dog Dale was his namesake character from Twin Peaks in an FBI Jacket. Also, a bunch of my friends surprised us at our Halloween party dressed as other Twin Peaks characters!”

Katherine: “I’m the person that starts planning my next year’s costume before this year’s Halloween is even over. In recent memory, I’ve been sushi, the Mona Lisa, Bo Peep from Toy Story, the Chiquita banana lady and Miss Scarlet from Clue. It’s hard to pick a favorite, but there was one that I liked so much I repeated it from childhood to adulthood. When I was 8 or so, my mom saw this costume idea in a magazine. It was…wait for it…spaghetti. Yes, I was spaghetti for Halloween when I was 8. Red sweat suit (sauce), brown puffs (meatballs), yellow yarn and a colander hat (noodles). I brought this costume back when I was in college (see photo above), and this time I added the Parmesan purse.”

James: “I literally don’t remember any of them. I think I was Billy Mays once, but I wouldn’t have had any props—just the blue shirt and khakis. It was just after Billy’s death, a tribute to the greatest (and loudest) pitchman of modern times.”

Emily: “My favorite Halloween costume was probably a costume my mom sewed for me. She’s pretty good at sewing and made me a Disney Cinderella dress when I was 7 or so. I liked it enough to wear it two Halloweens in a row, which was interesting because I was kind of a tomboy as a kid.”

Jon Van Wezel: “(My favorite was) Gilligan. Because I ran into one Skipper and two Gingers that year. They seemed happy to see me.”

Side note. When asked for a photo of his costume, Jon’s response was: “Mine was in the ‘90s. Great memories, no evidence.”

Luke: “My favorite Halloween costume was a few years ago when I dressed up as a hipster. It was low-cost, comfortable and something I had never done before. Plus, it was nice to wear flannel and long pants with boots in the cold. I just took stuff from my own wardrobe, mixed and matched it and voila: I had a costume that required little effort to put together but ensured laughs and a good time all the same.”